My artwork is an exploration into the balance of light and dark in humanity and its relation to nature – just as the waves ebb and flow so too does the human form through its various emotions, forms, and ages. Art for me has acted as a therapy for darker elements of my life and a celebration of the love and transformation I have found in the solitary places of nature and my mind. My art is a display of this juxtaposition; trauma, grief and hardness put in contrast against softness, beauty, and vivid color. I want my art to be a statement that we are more than the bad things that happen in our life but also incapable of growth and self-realization without them 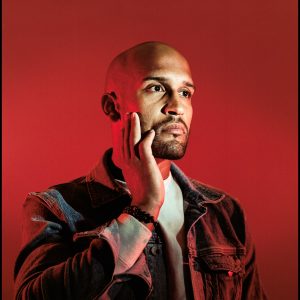 Sequoyah Burke-Combs is a self-taught artist and painter from Dexter, MI. His artwork is an exploration into himself and his emotions as he tries to capture his individual spirit and perception of reality. He achieves this through symbols, real objects, perceptions, vivid colors and his dreams. His main subjects thus far are blends of people and nature with objects and subjects including: flowers, water, the moon, eyes, animals, hands, a common theme of stars in the background and the human figure in various positions such as those attributed to dance, grief, reflection, and support.

The work can be seen as a style rooted realism, surrealism, expressionism, or symbolism put he doesn’t adhere to any one specifically and considers it imaginative or without label. He has always been inspired by art in all its forms but is most drawn to and inspired by classical artists like Leonardo Davinci, those of the surrealist movement such as artists Frida Khalo and Salvador Dali and more subversive contemporary artist like Bansky. Moreover, he is inspired by anything that provokes his thoughts or emotions and enjoys any art that is purely imaginative, challenges perceptions or that which is rooted in the divine.

His early childhood was one in which he was surrounded by addiction and depression amidst his family and eventually lost his mother and brother when he was three and eight years old to suicide. Blessedly, he was adopted into a family and community of friends that supported and showed him love. However, he could not run from his past nor the issues he would face as he grew. In his journey of healing art became a balance for him, a way to express himself as he learned to embrace and release his past to see light and beauty amidst the contrast and darkness. When he was young art was a tool to overcome and work through trauma, now it has transformed into a passion that brings positivity into his life and that is a gift he wants to share with others.

Sequoyah has created 40+ non-commissioned paintings from 2019-2021. He has headlined at six locations in Greater Seattle area, won and was recognized in national and international galleries/competitions for in person shows and through social channels such as web, magazines, and Instagram. In 2021 he used his artistic talent to pay for his puppies high medical bills due to Bronchopneumonia and is in the process of finishing the 35+ animal painting commissions from that project.

He led, supplied and instructed a painting class for 12 veterans in 2020 through the Army Veteran AzimuthFoundation in which he used it as platform to work through and express trauma, connection and healing without the pressure of sitting down to talk about it. This project was similar in spirit to how he has found the power of artwork and its ability to subconsciously work through and express issues and subtly bring reflection and healing.